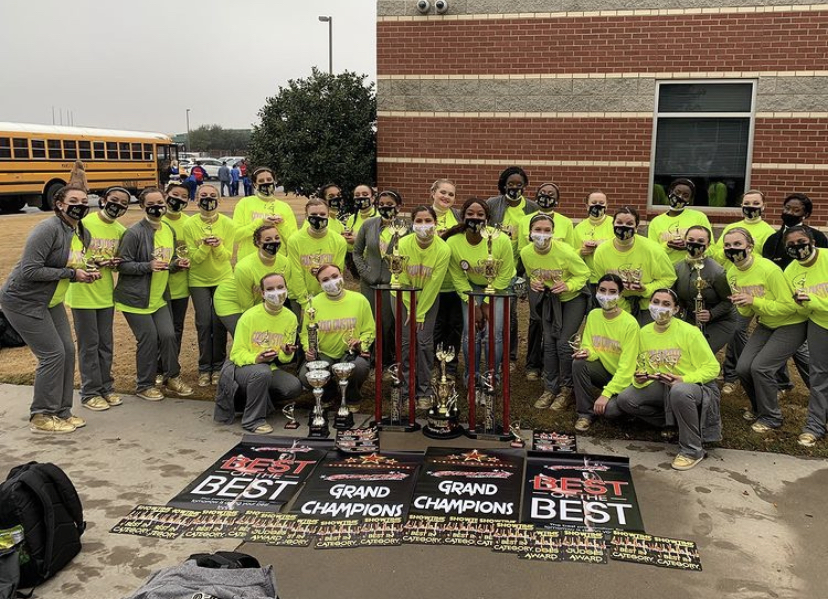 To prepare for the remainder of their competition season this year, the Gold Duster drill team will continue to sharpen their skills at practices after school and on Saturdays. The team will compete at Nationals next month.

“My goal during practice is that we are consistent, we work on fine-tuning our technique and we work hard to achieve a uniformed, clean team look with all of our movements,” sponsor Nicole Numa said. “We also bring in outside choreographers and judges to help us achieve the competitive edge.”

For competition season, the team runs through each of their routines, with solo and duet performances in between. Then they take about 30 minutes to practice each style (jazz, hip hop, lyrical, etc.) and tie up loose ends.

“Elite members and officers stay after 5 p.m. to go over our own routines as well, which helps us prepare and help the team” senior lieutenant Riley Jackson said. “We always practice in the cafeteria after school, but reserve the P.E. gym on Saturdays because we compete on a gym floor and it helps to have the lines to go through spacing and know where your position is.”

During the competition, teams are separated into categories based on size. Then the routines are broken up by style and performed in front of a panel of three judges for a possible 300 points.

“To get an overall award, you must submit at least three team routines and you’re trying to get as close to 900 points as possible,” Numa said. “The teams closest to 900 points win in category and then you are awarded overall no matter what your team size is; this award is called ‘Best of the Best.’”

The Gold Dusters competed the over the past month and received first place in category for Team and Elite, and third place overall. All soloists also received division-one ratings.

“The team was able to put all of our hard work on the floor and receive valuable feedback from the judges,” Numa said. “The girls will correct as much as possible from the judges’ feedback to improve their scores. Officers are each given the score sheets and we listen to the feedback as a team. From there we set a plan on what we will clean and correct to be prepared for the next contest.”

“We have worked really hard on our duet since October, so it’s really rewarding to win two weeks in a row,” Lederman said. “It’s really fun to be able to do a dance with your best friend and I think it’s a good way to share something during Emily’s senior year.”

Senior and Captain Lauren Stacy said her goal is for everyone to do their best and be proud and confident in their performance.

“Though it’s exciting, winning isn’t everything; to me it means that other people can see how much time and hard work we put into our dances,” she said. “For me, I want to be able to walk off the floor and know I put everything out there. Another goal for myself is to lead the team the best I can so they are confident in my abilities to lead them.”

Numa said through this competition season, she hopes the girls learn discipline, gain respect for others and understand the meaning of hard work.

“Winning is great and we definitely do not attend contests to lose, but I want them to work hard, have a good time and do their very best,” she said. “This team has grown so much and they have persevered through this tough year and made the best of every situation.”