“While the Lights Were Out” Theatre Review 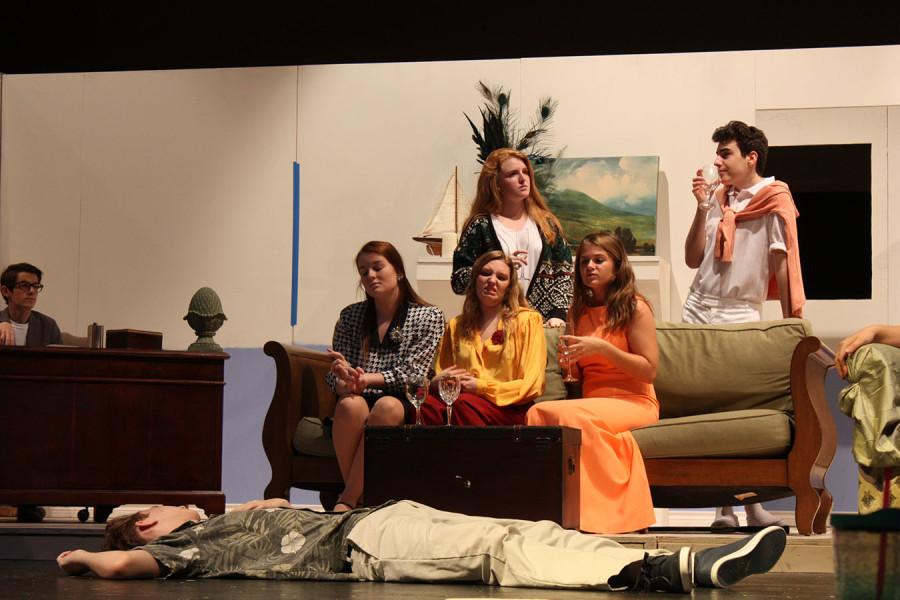 Following the story of an abusive husband who is mysteriously murdered, the play contained several hilarious scenes with comedic comments and actions. Set in Bermuda, the cast has many odd, unseen performances, including acting out their words while they are explaining to “Miss Jasmine Perdoo,” a nosy lady from Alabama, played by Natalie Jackson.

A little ways through the play, Lord Clive Wickenham (Garrett Cobb) is pronounced dead by the inspector Benjamin Braddock (Hunter Ginn), who relieves the dark mood with his inability to solve any mystery. A young girl dressed in provocative clothing appears next to Lord Clive with a bloody dagger, and instead of suspecting her of murder, Braddock flirts irrationally with the unidentified blonde (Paige Sommer), who is later revealed to be his girlfriend, the librarian.

Throughout the show, sergeant Alma Threedle (Reagan Fraze), jots down everything that is said, progressively watching the actions of others and is able to solve the murder and attempted murder that has the rest of the guests puzzled. While everyone else is eating dinner, Threedle explains what she’s learned to Braddock, who is still confused but attempts to regain the respect of his crowd. Finally, after revealing everyone’s affairs, Threedle tells the story of what happened “while the lights were out.”

With a spot-on French accent and large attire, Shelby Priddy, playing Bibi Cavendish, gets the crowd laughing every time without fault. Her short but determined lover, Perre Pourri (Hayes MacGregor), also has humorous lines with his accent.

Brandon Hedger, identified as the “Set the Mood Man,” was originally an understudy, attending every rehearsal and memorizing all of his lines. Out of gratitude, the directors decided to place him on stage as a second butler, who even kissed another character, Nancy Stafford (Hailey Hatfield), without warning the second and third night of the show, bringing surprise and laughter not only to the crowd, but backstage, too.

An absolutely amazing cast, directors, and crew worked tirelessly on this play and performed it without flaw. With a two week break ahead of them, much of the cast will move on to auditions for the school’s spring musical,Sweeney Todd.