5 ways to use a Pumpkin 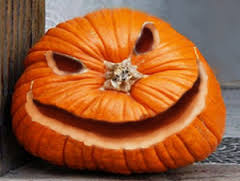 It’s that time of the year again. The holidays are coming up. Halloween is right around the corner and pumpkins will be on everyone’s front porch, and in every basic girl’s coffee. However there is more than one way to use a pumpkin, besides drinking them in spice form, and this list is here to bring those ways back.

#1 Carve it: Who doesn’t like carving pumpkins? This is the best way to get into the Halloween spirit! It is also the best scapegoat for not having to decorate the entire front of the house, for all the lazy people out there. Just mutilate the pumpkin until it feels the spookiest and set it out on the front porch, or doorstep. It’s that easy! One easy-as-pie way to get your neighbors to shut up about your lack of Halloween decorations.

#2 Bake it: Speaking of pies, why not just bake a pumpkin flavored one? Call up your grandmother (let’s be honest here, you need to do that even when it isn’t time to bake for the holidays) and make plans to go to her house and bake the best gosh-dang pumpkin pie in the world. A pumpkin pie would taste so much better than any form of pumpkin spice mocha latte whatever.

#3 Smash it: Sadly the pumpkin spice season will last longer than any normal pumpkin on the front porch. So what is to be done about that two-month-old pumpkin sitting there to rot? Well pick that sucker up and throw it at a wall or something. Get a hammer and go all Gallagher on its unsuspecting pumpkin behind. In fact, on November 1 from 1 pm – 4 pm, Key Club is having a pumpkin smashing social, so bring your pumpkins to Rose Park for free food and plenty of pumpkin smashing.

#4 Wear it: Carve some eye holes in that pumpkin and put that bad boy on your head. Once it’s on your head, do a little spooky dance to get into that Halloween spirit. Just imagine all the little kids you could scare with a pumpkin on your head. The answer is lots, lots of kids. Scaring kids is more fun than a Starbucks line right? Yes.

#5 Criticize it: Making pumpkin spice stuff is something you can do with pumpkins and this entire list is just a sham to make fun of the whole concept itself. So why not make fun of it? It’s simple, easy and because you either love the stuff or hate it. Now pumpkin spice anything isn’t that bad, but seeing the stuff everywhere for months on end starts to get to people sometimes.

Have a safe and fun Halloween everyone!