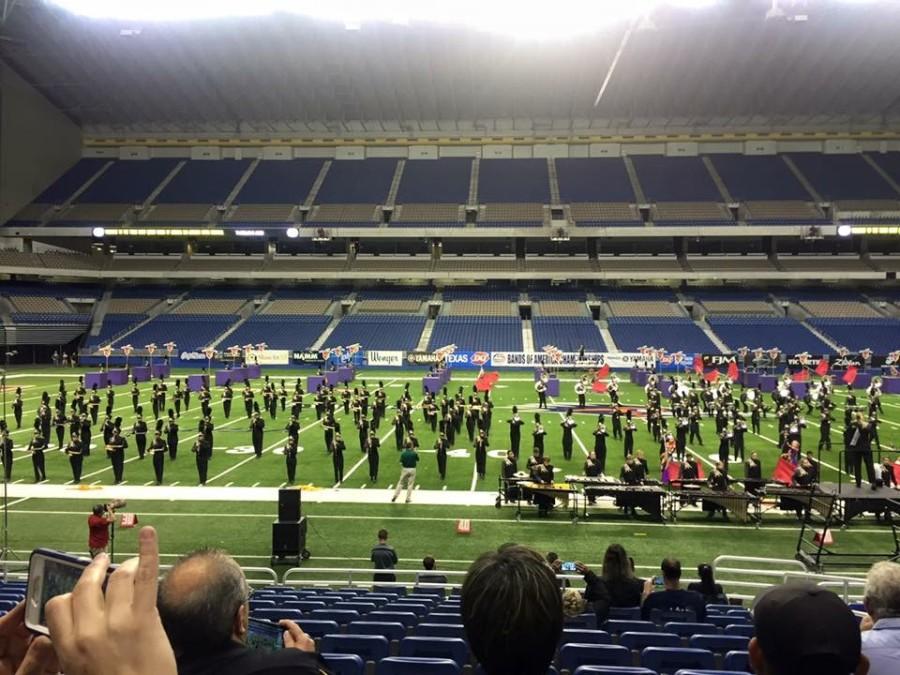 The marching band competed this past weekend at the Bands Of America (BOA) Super Regionals competition in San Antonio against 64 other bands from across the state and country.

“BOA is a marching competition that has different judging standards than state-held competitions,” senior Kezia Dearden said. “There are field judges that judge individual ability, and general effect (which is the overall impression your show has), [and] counts as 50% of your score as opposed to state competitions when it doesn’t count nearly as much. It’s where a lot of the best bands in the country go to compete, and is arguably the hardest marching competition in the country.”

The competition took place over two days, and hosted 65 competing bands. Due to heavy raining and flooding, the marching band almost did not go, but the buses were able to take a different route and got the band to the competition safely.

“It was really crazy getting to the competition,” Dearden said. “We had to be at the high school at midnight, and we left at about 12:45 am. We were late because of the rain and flooding, so we showed up halfway through our warm-up time. A band traded places with us so we could have more time. They were a really nice band.”

Despite an extremely early call-time, a long bus ride, and a rushed warm-up, the members felt they did extremely well during their performance.

“I feel our performance was the best one we’ve had because I think everyone was really ready for it,” senior Eric Mendez said. “I don’t think anyone was really scared even though we were in a giant stadium. I was really proud of the performance.”

Walking off the field after performing, the band was in high-spirits, feeling confident in their performance.

“During the performance, Chloe Shaw, the head drum major, had a really big smile on her face when she was conducting,” freshman Peyton Brown said. “It was a really good feeling because she helped us underclassmen know that we were making the upperclassmen know that they’re leaving the band in good hands. The last moment of the show was a very proud moment because our three months of hard work had paid off.”

After performing, the band sat in the stands and watched the other competing bands perform while they waited for results.

“It was pretty funny later on when we were in the stands watching bands,” Dearden said. “We were all so exhausted since we got very little sleep. Half of the band fell asleep in the stands, all slumped over on each other even though there were really loud bands playing right in front of them and the seats were really uncomfortable.”

The competition only advanced 14 on the 65 competing bands to finals. Unfortunately for the marching band, they missed finals by five points. However, the band was not too disappointed by this.

“This was one of the best competitions,” Mendez said. “This was my last competition as a senior. I’m never going to have a band competition ever again. For our band, we got to show what we have been practicing for the past three months. It all paid off knowing we had performed better than we ever had.”