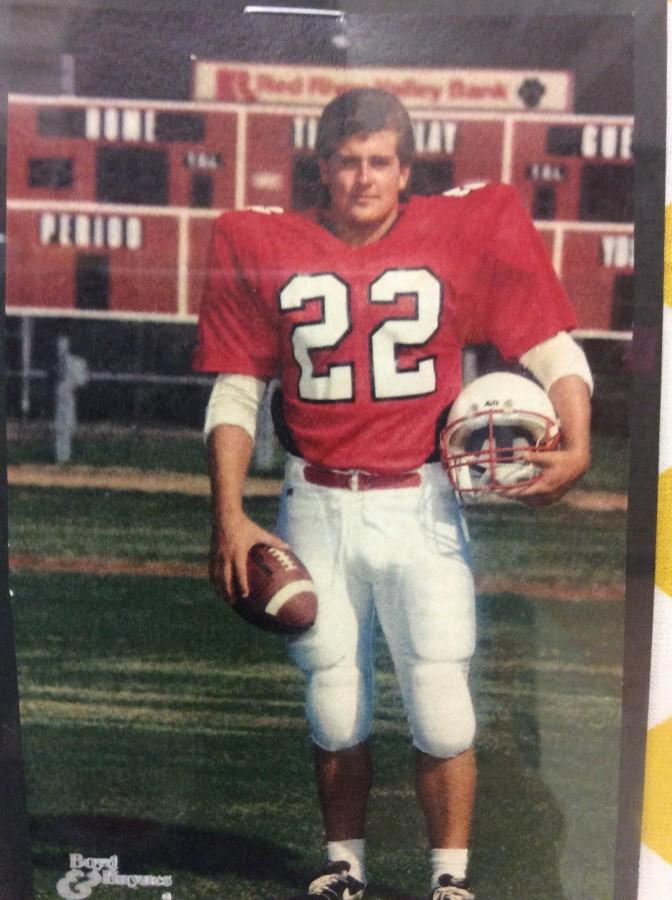 This story is all about the AP World History and AP Psychology teacher, Coach Scott Holmes. He is known for his crazy stories and funny comments, but this week, he went back to the old days- high school.

What high school did you graduate from?

What were you involved in?

“Football, basketball, baseball, president of the Lions Club, and I was in the French club, just because I could get out of class, so I could get pictures taken.”

(Note: The Lions Club was essentially Key Club in his high school.)

“Average to below average student; I was not a very good high school student.”

“Football, I’m serious; I hated class, I hated school, I didn’t like school at all. Honestly, I don’t think there was a single teacher in that school that I liked, or that took notice of me.”

“My first football game. I was a junior, and we played Bird High School, and I had two interceptions. That kind of put me on the map.”

“Two of my best friends murdered one of my best friends. I had to go to court and everything as a state witness; they got life in prison. My brother was in Germany in the army and he read it about in USA Today. He called me and said “Is this you?” and I said “That’s my school.” And he said “And that’s Monte?” and I said “That’s Monte Smith, the kid who got shot.” He  said “Bryan and Dwaine killed him?” I said yes. It was national; two white boys killed a black boy. That was my senior year; that ruined everything.”

Did you enjoy high school, why or why not?

“Yes, I got along with everybody; I didn’t have any problems. I never had a single argument with anybody; I was homecoming king my senior year. I enjoyed the social life of high school; I hated the academic part.”
What would you be described as in high school?

“Class clown, jock. That’s the best way to put it. I got along with everybody, but I wasn’t academic at all. I was a very good athlete though. Kind of a ladies man, true story.”
How many people were in your graduating class?

Did you go to prom and if so, who with?

Was prom fun for you?

“I cooked. My best friend and I, we cooked steak and lobster for the girls we went with, then we went to the dance and to the after party. We didn’t have an after prom like y’all do. It was boring.”

What was the most rebellious thing you did in high school?

“Like legally speaking? I cheated a lot. That was pretty rebellious; I was a pretty good cheater. I was notorious for it.”

Did you ever get caught?
“Oh yeah, I got caught by… she was actually on Oprah Winfrey one time, and she caught me and Chris Bladelock cheating on a geometry test. She chewed us and my football coach walked by. Oh, it got worse. We went back inside and when we went to practice we got tore up. But her daughters had her on the Oprah Winfrey show because she gave up her retirement so that her daughters could go to school and Oprah gave her some sort of surprise. I don’t remember her name though.”

Would you go back to high school if you could? Why?

“Yes. The academics; I wasn’t going to college, I didn’t try hard. I had to go to the military and get shot at; I suffered a little bit because I didn’t study hard. If I could do it all over again, I would’ve worked harder in the classroom, but have everything else exactly the same. I have no regrets other than the fact that I just didn’t do what I was supposed to do.”