Behind the Scenes: Theater Tech 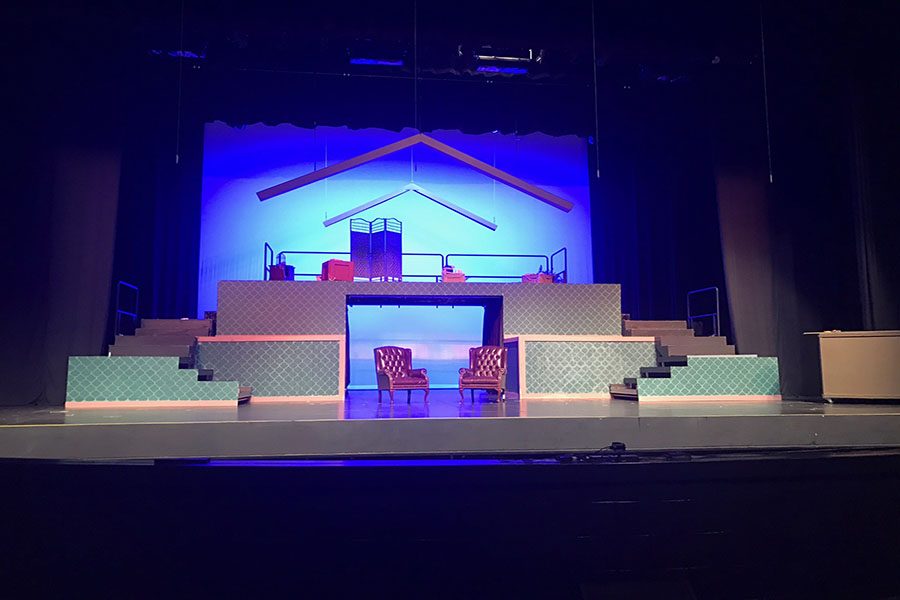 I walked into the theater and gazed upon a heaping stack of wood and metal bars carefully constructed to resemble a set. There were stairs carefully nudged in the back to lead the actors to their positions in the following months. Each time I would stop by to visit and interview, that heaping stack would be more and more refined, eventually becoming the finish product. It is definitely one of the larger sets I have seen for a production.

The first thing to learn was the sheer amount of time it took to build the large set style needed for Little Women.

“That depends on how complicated the set design is, the process can go quicker if we have the pieces already built,” senior, Sebastian, Jaurgeui said.

Jaurgeui then explained that this production was somewhat a lucky break, because the team did have quite a bit of the set complete, allowing the cast to start rehearsing on it sooner. Though that isn’t the typical way sets are made.

“We get the shop clean, then Corley comes in and tells us what we need built, we get those materials, whether it be 2x4s, or 4x4s, 3/4 plywood, then we get it built after that Corley tells us where to put it,” senior Ross Peak said.

One burning question that stems from learning about the students and the process is: Why? These kids are already spending so much time around the set, literally building it from the ground up and all for only getting mentioned in the playbook. No one goes back to school after a show weekend and talks about the wonderful set design, the actors get all the recognition. The “burden” from only staying behind the curtains must not be too much of a burden at all if you are anything like Peak.

“I don’t act. I cannot move. I am a broken old man. I’m good for picking things up and putting them down. No, I don’t do the dance,” Peak said.

Just because the tech students end up with the shortest straw doesn’t mean they have a bad time. In fact spending that amount of time together can make friends out of anyone involved.

Of course we’d get to this topic eventually, but with this school year came the implementation of the block schedule again, which from last year has changed the flow of class quite a bit.

“I do believe that it does [change the way we work in class] in the sense that I used to have three tech classes and that would give me an extra block to work on the sets, and now I found myself being more divided, but that’s a good reason to have these smaller sets, it makes it easier on everyone,” Theater tech teacher, Mr. Corley, said.

As for a “small” set, you would have had to go to the show and see for yourself. Little Women went from January 19-21, and I hope you made sure to give an extra loud round of applause for the people that helped made the show the best it could be: Theater Tech.