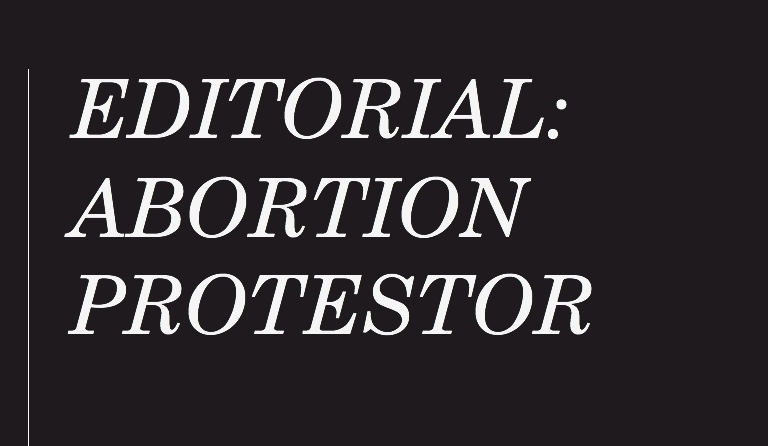 Recently, a man has been standing on the public sidewalk directly next to the entrance of the school where students enter the parking lot holding a sign that states “Abortion is Murder” as a protest against abortion.

Though this man has the legal right to hold his sign in protest on the public sidewalk, he should not be there because he is shaming others for having a different opinion, ignorantly criticizing the situations in which abortion is necessary and harassing vulnerable teens who have not yet figured out who they are yet.

The man should not hold his poster outside the school because he is shaming people for having a different opinion than him. It is ok to express opinions but it is not ok to shame others for not agreeing. Just because someone is “Pro-Choice,” meaning they believe abortion should be left to the choice of an individual, it does not mean that they agree with abortion necessarily. Many who are “Pro-choice” believe that someone’s decision to have an abortion should be left to that individual rather than a collective decision made by the government.  Everyone should be able to have an opinion on a topic without being shamed and tormented; this man is shaming people who believe women should have the right to choose what to do with their own bodies.

While some abortions are by choice, others are medically necessary for the survival of the woman carrying the child; the protester is ignorantly shaming these traumatized women for following the doctor’s order to survive. There are cases where young girls have been impregnated as a result of rape. When a young girl is neither physically nor mentally developed enough to safely give birth to a healthy child, her and the baby’s chances of survival are slim, which is why a doctor may suggest an abortion regardless of the mother’s opinion. This man is calling these poor young women murderers for acting upon their doctors’ orders.

Choosing to stand in front of the school to protest abortion is dangerous as young students in our school are still trying to figure out who they are as individuals and what they value. Shaming vulnerable high school students for believing abortion should be left to the decision of the individual is morally inappropriate. Though he is legally protected by the law to peacefully protest on the public sidewalk outside of the school, he shouldn’t because it is morally wrong to shame young, innocent minds for having a different opinion .

If the man insists on protesting against abortion, doing so at a high school is not how it should be done. He should leave the vulnerable minds of students alone and not shame them by calling them murderers for having a different belief than him.

Though this man is following the law by peacefully protesting on a public sidewalk, he is breaking implicit moral codes by shaming others’ beliefs that differ from his and harassing youth. Just because you are allowed to do something, does not mean you should do it.