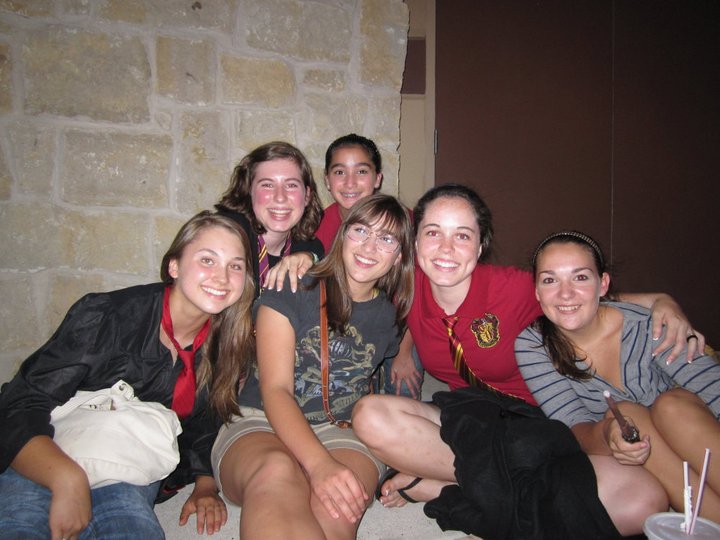 For this week’s Throwback Thursday article, we got to learn about our new favorite art teacher. She has quickly gained both respect and love from her students, in a little over a year of teaching.

Q: What highschool did you go to and where?

A: I went to Cypher High School in Houston, Texas. I didn’t grow up there, but I started going to school there when I was seven. My family is from Louisiana and we lived overseas for awhile. That is where I mainly grew up.

Q: What kind of student would you have described yourself as?

A: I was a very hardworking student as I was in any AP class I could get into. I was very meticulous and worked harder, not smarter. Looking back, I realize that now. I often made it harder for myself because I didn’t have any good note taking habits so I just needed to know everything. I was very involved as a student. I was in athletics. In my junior year, I was in key club and national honor society and involved in art club. I kind of had two separate worlds in high school. I took art all four years and I did AP art. Then I had this other time where I gave up senior year with honor society and key club, not because they weren’t good, but because I realized what I wanted to focus on.

A: I played volleyball and I was the DS libero; I was also setter. I played club for 3 years. I played all through middle school and played two and a half years in high school.

Q: What were some of your most memorable memories in high school?

I was in choir and that was a thing I kind of piggybacked on because my brother is a year older than me and he convinced me to join. I had six best friends that I’d been in grade school with and they were all in choir. So this wasn’t a bad idea. I loved music anyway, but didn’t expect myself to enjoy it as much as I did, or be as successful  as I was. Our entire group went to New York for spring break. We got to sing at the Lincoln Center, which is a huge theater in NY and people like Miles Davis have gone through the theater. We were walking on stage from the back and all of their portraits were just hanging up down this line; it was just a really surreal moment. I wasn’t in Houston at the time, but I was in the suburbs outside and to be there was a really neat experience I will never forget. The people that were there in my group bonded. Most of my fond memories were with my group of those six friends I had so long. And there were years that we weren’t as close, but we all had the same motives and just made a lot of memories.

Q: What was the most embarrassing moment in high school?

I was very quiet so there was nothing embarrassing that happened where I put myself out there and was like “oh no, I shouldn’t have done that.” But there was this person who I had a huge crush on. I made him a mixtape for him and when I gave it to him, I didn’t have my zipper up on my pants and didn’t realize that until 30 minutes later when I was sitting in class. He probably didn’t even notice but I vividly remember that.

Q: What was your favorite class and why?

A: I’m expected to say art, but I knew it wasn’t the best experience. My freshman year, I took art and I wasn’t super excited about it but I took it because I didn’t want to take any other fine arts. I’ve always done art when growing up and my mom convinced me to take it. I loved my teacher, but she got really sick the next year, so she left and had to leave school. I had the other art teacher that had been there for a really long time. I think my other favorite class was English IV as a senior. We read Hamilton and Macbeth. My teacher would decorate the room like a play stage when you walked in there were smoke going off or a wall of red blood stains and skulls. I probably wouldn’t have liked reading these things without her explaining what they actually meant with the hidden metaphors and symbolism. She just loved them so much that it was so interesting. She made something that I wouldn’t have enjoyed interesting. We would also watch films, do role playing or read parodies and contemporaries. There was a lot of ways she made it really cool.

Q: What are some of the singers or bands did you listen to?

A: Definitely the ones that come to mind are Paramore, Death Cab for Cutie, The Shins, Ingrid Michaelson, and Regina Spektor. I was a huge Paramore fan and I still am. Those were my main ones. Definitely alternative Indie music, I wasn’t a huge today’s music. I was an angsty kid and very emotional.

Q: What college did you attend and why?

A: I went to TCU. Originally, I didn’t know it existed until I started to apply for school. First, I thought I wasn’t staying in Texas. I was like “I’m getting out of here, I’m going to LA, I’m going to New York.” At this point, I knew I wanted to do art, and I thought these were where all the good art programs are and this is where I need to go. And then, my sister just mentioned on that I should visit TCU and that I’d really like it. So I visited. At that time, I was doing graphic art design so I wasn’t in art education or education at all. (TCU) has a really good graphic arts program. It’s really competitive, but it’s one of the best in the south and figured “well, this is probably a good fit.”  I didn’t know anyone who was going and I liked that. Those are the main reasons of why I went. They were also the only school that offered me scholarships. I (thought), “this is probably the best choice to make.” But actually during my sophomore year I was still in graphic design and I remembered my professor said you see all these people here, they’re not your friends. I (thought) “okay I’m out.” So my parents (said) “you can’t do studio art, we will not let you just do that, and you don’t want to do graphic art (nor art history).” So art education was the only one left. I was hesitant especially after my high school experience. I didn’t want to be an art teacher because I felt like it was a cop-out. If you can’t be an artist, you are an art teacher, which is not true. But then as I went through the program I just fell in love with it and I realized “no, this is what I want to do and I’m going to be the art teacher I wished I had in school.”

Q: What inspired you to be an art teacher?

A: My personal experience with art has been a large part of my story as a human and it has brought me up from a lot of dark places. It’s given me a lot of purpose in the world. It’s the way I look at the world. I’m a visual person and I see things and am attracted to things and I like to make things; so art for me is really healing and I knew that if there is something  could spend most of my hours doing every day, it would be this. I’m still making artwork on the side and I’m an artist as well as a teacher. That is really cool to have to do these at the same time because I have a lot of friends which that their job is not even directly related to their artwork. It’s hard to balance those two things and it’s hard to have time to explore. My job informs me as an artist which is really cool.

Q: Do you have any advice to students?

A: First thing is you’re going to change so much, and I know that is so hard to realize because some of you are so sure of yourself. And you can be sure of yourselves in a particular year and that is great, but don’t put the pressure on yourselves when you leave. Let yourself explore and explore all parts of yourself. If you want to be in athletics, fine arts or clubs, and they are completely unrelated, you are honoring those three parts of yourself. So let yourself do that because you never know where it is going to lead you. In conjunction with that, don’t put too much pressure on yourself. I know the world and school can tell you that you have to know what you want to do, and it’s good to have a plan, but you’re not going to run out of time. I switched my major after my sophomore year. That’s halfway through school and I still made it out in time, even earlier than I should have.You never know where life is going to take you and you never know the people you are going to meet; changes still happen and it is going to be hard,but change is good. I say by the time you are a senior, you should be ready to leave and that’s a good thing. Don’t grow up too fast. Everyone wants to be an adult and it is actually really hard. Don’t be too quick or in a hurry to grow up.