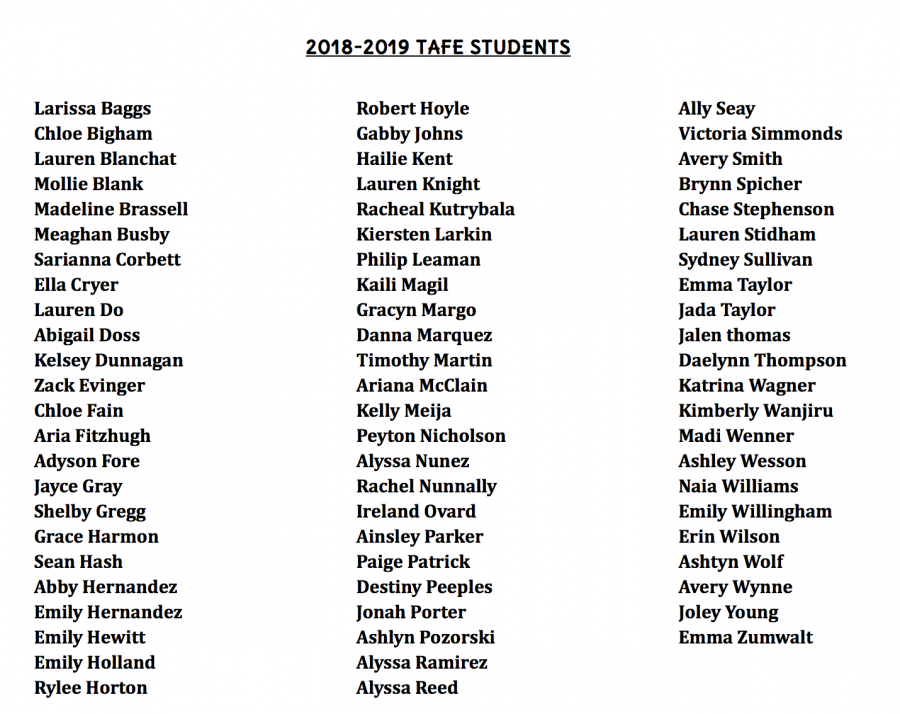 After competing in the Texas Association of Future Educators (TAFE) regional competition in early December, all 32 MHS participants qualified for the state contest, which will be Feb. 28 – March 2 in Allen.

“It’s a little overwhelming, but I’m excited about it,” TAFE sponsor Angela Fore said. “Last year we only had nine go on to state, out of a 15-person club. This year we have 70 and a lot of us are going. That just means that (TAFE) was definitely a student organization that was needed and it’s doing what it’s supposed to do.”

TAFE is an organization that gives students an opportunity to explore the teaching profession. They perform tasks such as making lesson plans, shadowing teachers and visiting universities to learn about their education department.

“TAFE exists to go alongside all the other education courses that (the district) has to offer,” Fore said. “It’s co-curricular, which means that everything we do in the club is attached to the things we’re learning in the class. It gives the students more well-rounded experience than if they just had the class alone.”

At competitive events, students demonstrate their skills by creating lessons and activities for a variety of grade levels and subject matters.

“There are several things the kids can do as far as the competition scene goes,” Fore said. “(The students) get to choose from different styles such as the Bulletin Board or Classroom Management. What they choose determines what their roles are for the contest.”

Although TAFE is not a widely-known organization, its number are slowly growing, both here and across the country. Most students who see themselves in an education career choose to take the Principles of Education and Teaching class, then go on to participate in TAFE.

“I took TAFE because I want to be a teacher whenever I grow up; that’s what I want to pursue,” sophomore Timothy Martin said. “I want to teach high school history, and this was a chance for me to really put that career plan into action.”

After an injury in football, resulting in him ultimately getting away from the sport, Martin said he felt lost. He asked himself, “What do I do now?” As it turns out, TAFE was the answer he was looking for.

“It was a very positive thing for me because football was the one thing I had going for me and I was really passionate about it,” he said. “I knew I wanted to be a teacher, so whenever I got the option to be in TAFE, I was really excited. I just wanted something to work toward and put me on the path to where I wanted to be.”

Martin said the competitive-nature of TAFE helps bridge the gap between his change in extracurriculars. There are several aspects of the contest, with each requiring students to perform a different presentation surrounding the life of a teacher.

“For my part of the competition, I have to simulate what a real classroom would be like,” Martin said. “I have to plan activities and lessons; it’s pretty much classroom management and how well you perform in front of a class. What (my team and I) did for regionals, we’ll take that same competition and make it better for state.”

Junior Daelynn Thompson, who said she wants to be a Spanish teacher, participated in the Bulletin Board competition at region.

“(In that event), you have to pick a grade level and subject and build a lesson off of it,” she said. “You have to explain how it would be used in a classroom and (the judges) grade you based on how well the kids would actually learn from it.”

Thompson’s partner, sophomore Chloe Fain, also did the Bulletin Board competition, along with the Pre-K Literature Book event. For that, they had to choose a grade level and subject – similar to the bulletin board – and build a book idea from that.

“We decided to do seasons-based TEKS (Texas Essential Knowledge and Skills), and the book has to be created entirely by yourself; you can’t have images from online, so you have to draw and write everything on your own,” she said. “We did a bilingual book, with English and Spanish. (The style of competition) just depends on what event you are doing.”

TAFE has become the main reason Fain wants to become a teacher, she said.

“I didn’t really know what I wanted to do with my life; I thought I wanted to be a pediatrician,” she said. “With TAFE, I just joined not knowing what to expect, and it’s completely changed my life. I know exactly what I want to do, thanks to getting that experience.”

The organization has helped many aspiring teachers see what actually goes into teaching beyond the classroom.

“It definitely opens your eyes to what a teacher actually goes through,” Thompson said. “When you think about being a teacher, you only think about what goes on in the classroom: what you actually teach the kids. In reality though, it’s more than that. It’s just really prepared me for that and it made me realize I actually do want to be a teacher.”