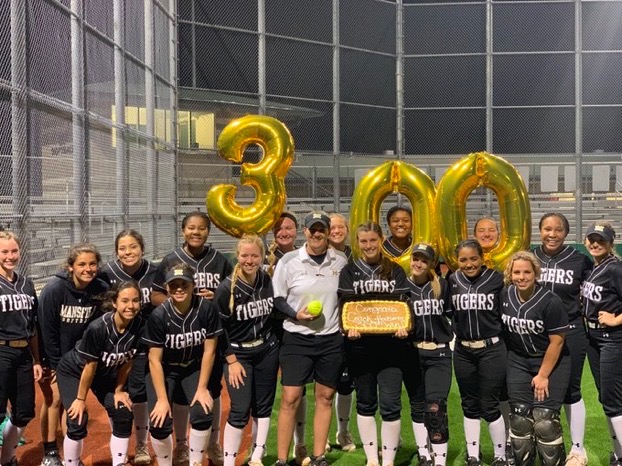 Nine long innings are over, won by 15 points with three home runs, when head softball coach Jennifer Haltom turns around to see a parent on the field coming her way. A cookie-cake and a softball signed by each player in hand, a mass of balloons trailing behind. All of this is in celebration of Haltom’s 300th win.

After 12 years as head coach, Haltom achieved win number 300 and will continue to guide her team to play for the second game of a three-game series 7:30 Friday at Mansfield in attempt to advance into round three of playoffs.

“I’ve hit this big achievement and that’s really exciting,” Haltom said. “Going to the state tournament has always been my goal and we’re just going to keep working until it happens.”

Since her college softball coach suggested coaching as a career plan and helped her to get her first job, Haltom said coaching is the best thing she does. She tries to find what makes everybody tick, figuring out what everyone on the team needs to make the team as great as it can be.

“Coaching is everything,” Haltom said. “Coaching is not just about the sport, it’s the relationships you build; seeing a spark in someone and helping them achieve their dreams. For me, it’s about taking them to the next level. We try to model some of the lifelong characteristics you need to be successful: character, accountability, resilience. Our game is all about failure and you’ve got to be able to react from failure, and I think those are things that help our girls later on in life.”

Through this style of coaching, Haltom has created strong bonds with her players, many of whom say she has created more of a family than just a school athletic team.

“The team gives me a family; we have traditions and it really is just a good atmosphere,” senior varsity player Reagan Hukill said. “Haltom is definitely a mom because she takes good care of us. She doesn’t yell, she just tells us what we are doing wrong, says fix it and then we’re done. That helps us grow more since we don’t get scared or anxious.”

Haltom won her 200th game during the current senior class’s freshman year, thus making this 100 wins with one group of students.

“Those four seniors helped me get win number 201, and it was their very first win too,” she said. “I’ve never had a class do that before so getting to share (this accomplishment) with them is really cool.”

Senior varsity player Kennedy Hardy was one of the four who contributed to the 300 wins and said this team has meant a lot to her throughout her years in high school.

“Each year, we were the underdogs and that brought us together as a family,” she said. “Though people were doubting us, we were going to prove them wrong and keep proving them wrong. This year, we continued that. People still thought we weren’t going to be as good – but we are – so we’re fighting together.”

Hukill was also part of this group and said it was a good way to end her four years playing high school softball.

However, Haltom has said numerous times that she is certainly not one for being the center of attention.

The only ones who specifically knew she was coming up on this big milestone was her husband, two sons and assistant coaches. She didn’t plan to say anything, but one of her sons ‘spilled the beans.’

“They know how crazy I am about not liking the spotlight and so they didn’t say a whole lot, but as soon as the game ended and I talked to the girls in a circle, I turned around and one of the parents had come onto the field with some balloons,” Haltom said. “It was really cool to know that the parents care that much and the kids knew. Though I don’t like stuff like that, looking back, it was a really neat experience.”

Even now, Haltom continues to say she could never have done any of this without her team andshe owes it all to them.

“I can’t do any of this by myself,” she said. “I have been very lucky and I can think back to all the kids and the 300 wins is not about me. It’s all about those girls I’ve gotten the opportunity to grow with and learn from.”