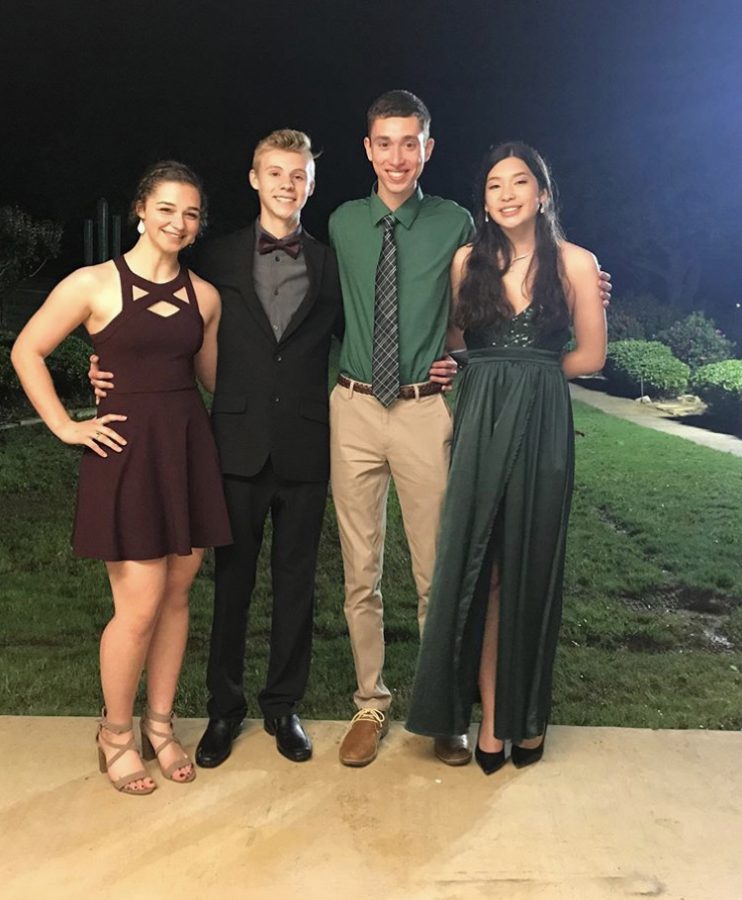 Once you reach high school, everybody’s heard of them and seen the Snapchat stories of the hyped-up night to celebrate the end of a season or year.

But what’s the big deal? It’s a dinner with some organization. Student media does not have a formal banquet like football or theatre, so I had no idea what all the hype was about. To me, it seemed like a night of standing around in uncomfortable shoes, making awkward small talk and taking lots of photos. Today, the new reality seems to be as though something didn’t happen if there was no proof to share on social media. As a result, I knew whenever there was a banquet scheduled, I could expect my Instagram feed to blow up with all sorts of posts to show off the night. Meanwhile, I was probably sitting at home in my favorite hoodie and a pair of old Nike shorts watching Friends reruns with my younger sister. I didn’t feel sorry for myself, but there was always that part of me that wondered: what would it be like if I went to a banquet?

So because I had never been to one and wanted this question answered, I always hoped to be invited and get the chance to see what the big deal was. Although, I still had doubts I’d ever be asked since I’m not that kind of girl who goes out much.

However, I was recently invited to the band banquet and all that changed. I was really excited to spend the night with my boyfriend and have fun away from the secluded bubble of my bedroom.

But then, my anxiety did what it does best: it played the game of “let’s make up endless worst-case scenarios to make Bailey flip out and lose her mind.” I worried about being socially awkward, not knowing people, not knowing what to do, etc.

So then came May 10: banquet day. I got home with about two hours until I would be picked up. Time to do hair, makeup and whatever else to prepare. I told myself I was not going to panic… but I did. What if everything that could go wrong… just… did?

But no. I would not circle into that ‘what if?’ state of mind. I blasted my favorite playlist and took a hot shower to wash away the nerves. After multiple issues with hair – my braid wouldn’t lay flat – and makeup – my eyeshadow did not match my complexion – I finally got it right.

Finally, I got the text informing me that my boyfriend was on his way. I put on my dress and heels and took one last look in the mirror to ensure that everything looked perfect. I decided it was as close to perfect as I was going to get.

So with my dad and sister trailing behind, I opened the door and there he stood, handsome as ever. He smiled at me, making me feel like the most beautiful girl ever.

Picture time came and I tried to remember what my mom told me: stand up straight, keep my eyes open and smile big. After what seemed like forever for my dad to hit one button and snap a couple photos, we were finally able to relax and head out.

The drive there gave me anxious jitters, but at the same time, I was buzzed with excitement and anticipation. I was going to my first banquet, and I’d get to see what the big deal was; and I was invited by a great guy who I have become so comfortable with.

We got there and the banquet hall is already crowded, tables set just so, everything decorated in traditional Mansfield colors of black and gold.  People swept past me in dresses of every style and color imaginable. I heard voices all around and the energy of the whole room was contagious.

One of my biggest worries was that my date would forget about me once he was around his friends, but as it turned out, I had no reason to think that. He was able to talk and laugh with them, all the while making sure I was part of the circle or holding my hand. Social outings are generally a big, fat ‘no’ for me, however, this was truly enjoyable. Everyone was laid back and just wanted to have fun.

While the dinner and awards section of the night seemed to last way too long, it still was interesting to see how excited people got when their fellow band members won an award. Everyone was celebrated, no matter whether they were a freshman or senior; in first or third band. Finally, the theme for the coming show was revealed, and while I had little knowledge of what it meant, the entire rest of the room seemed to have been holding their breath for that very moment, which was another aspect I was fascinated by.

After all the graduating members had been honored, it was time for socializing, dancing and picture taking. Now, I am not one to go out there and dance, but everyone else seemed to get right into it; it almost made me forget that I have no rhythm and actually want to dance… almost. But I joined in the crowd and smiled and laughed so much my cheeks began to ache. I was having such a good time and I did not want the night to ever end.

Four other yearbook members were also there, so I got to spend time with them too. One pulled me into the ‘Cupid Shuffle’ dance and though I felt like a fool with two left feet, I had fun being a kind of “anti-Bailey” and just living life to the fullest.

I continued to feel that throughout the night, able to let loose and say goodbye to the girl defined by anxiety and depression… if only for a few hours. But those hours were amazing and I was able to truly smile and be happy in that unfamiliar situation. I learned that banquets really are worth the hype, or at least the band one was. What I realized was that with band came a sense of belonging and family, and I realized I was even a little jealous of that. A part of me wished I had never quit band in middle school; that I could have devoted my life to marching. But I have to remember that I knew that would not have been entirely beneficial for me and my schedule. Also, I knew I wanted to put myself into journalism, and eventually, newspaper and yearbook. Those were my priorities and while both those and band can be done, I did not feel like I could handle the amount of stress and pileup of work that would inevitably come with it. I am in awe of those who continue to march through high school and I have endless respect for that group of people, but I know where my home is: student media. And so what if we don’t have a fancy, catered banquet? This year we decided to do something different and go to Painting with a Twist, which was just as special, if not more.

I also learned that banquets are not all about the dress you wear, the date you have or the awards you win; banquets signify the end of a season with a family you have grown so close with and mark the beginning of what is hoped to come in the next.

And yes, I did become one of those people who posted about being at banquet, not to brag that I was there, but to have the night set in stone as a way to concretely remember that high school is not just about studying for tests and losing sleep; it is more than that and by stepping out of your comfort zone, you too can experience the more exciting side of life.