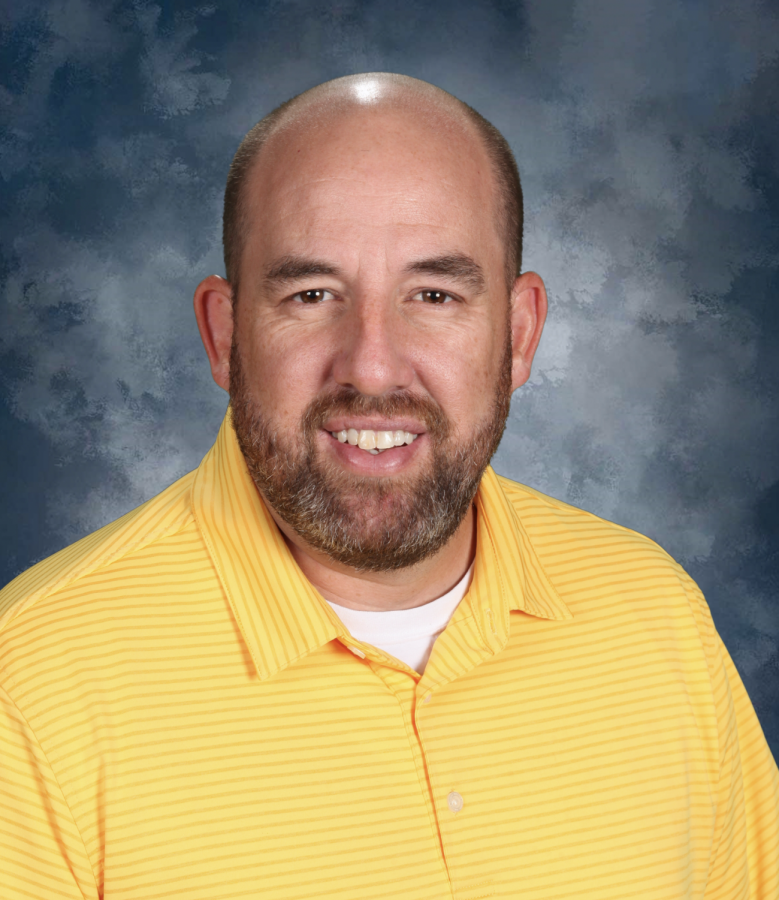 After former principal Jennifer Young accepted a promotion in the district, Trent Dowd jumped at the opportunity to fill the vacancy by becoming the newest principal. His plan for the first semester is to make contact with as many students as he can to create a welcoming environment.

“That (goal) means meeting and talking to the teachers, going to a lot of activities and events and trying to talk to parents especially,” he said. “I’m just trying to get to as many people as possible so that I know them and they know who the new guy walking around the halls is.”

Through these first few weeks however, he has realized it’s much easier said than done.

“At a high school, what I’m being reminded of is that it’s hard to get around to as many places and people because it’s so big,” he said. “But I am getting into the swing of things and am starting to attend more than just sports events; this past week I’ve been to an NHS meeting and multiple StuCo meetings. I also plan on going to the yearbook training for students next week.”

DeeDee Parsons, administrative assistant to the principal, said students are responding well to Dowd’s efforts, and he is making a lot of them.

“He is definitely not a ‘sit-at-his-desk kind of guy,’” she said. “Even in the summer when band was here practicing, he went down to shake everyone’s hand and greet them. He’s done that for volleyball as well and just anybody he possibly can.”

Previous to accepting the principal position, Dowd had been a teacher for over six years and an administrator for 10. He worked as a principal at an Arlington high school, then transitioned to MISD at Jobe Middle School. However, he said he wanted to get back to the high school level.

“There was a piece of me that missed the environment of a high school and missed the conversations you had with high school students; it’s very different from middle schoolers,” he said. “When the opportunity here opened up, I thought it would be an astounding opportunity. Mansfield has a great reputation, great kids and great teachers.”

Dowd said he aims to further establish the school as a place where students feel safe, both physically and emotionally.

“I think one of the most important things is making a place that has a really positive climate and culture for everybody,” he said. “I know that’s hard to do with 2,500 students and 150 teachers, but you do little things along the way to make sure that we’re doing fun things, not getting so bogged down by the schoolwork and everything else.”

Though many students, including Student Body President Katelyn Terry, built a firm relationship with Young, they are quickly becoming close with their new principal.

“With the new principal coming in, there’s always the impression of, ‘Oh gosh, what’s going to happen next?’” she said. “But I met Mr. Dowd on his first day at MHS; I was the first student that he came in contact with. We introduced ourselves and the first thing he did was tell a joke. I remember laughing and feeling like I could roll with him. He was amazing from the start.”

Dowd told Terry he had no intention of coming in and destroying the environment already in place because he already loves the school as it is.

“He said that he really wanted to be a part of the family we’ve already created here, which I thought was super special, so we’re excited,” Terry said. “He’s not here to change everything; he’s here to make it better.”

Terry and Dowd have meetings every few weeks where they discuss fundraisers and new events she wants to try. She said he has been nothing but supportive.

“He doesn’t just say yes to what I want to do, he encourages it more, which is amazing and more than I could ask for,” she said. “The first time I mentioned one of the activities we want to do later in the year, he was like, ‘Yeah, and let’s do this and this and this.’ He builds with me and he dreams just as big as I do, but in a different way, so we put our dreams together in every meeting and are able to figure out everything.”

Dowd continuously says Mansfield is the place to be. The opportunity opened up and he said he knew he had to take it.

“Honestly, Mansfield High School is the flagship of the district; when people think about Mansfield and the schools, a lot of times they’re going to think about MHS,” he said. “Also, knowing Ms. Young and knowing the type of culture she created, it aligned well with the kind of culture I want. I want people to be happy and I want them to enjoy what they’re doing. That’s why I realized it was a good opportunity for me to follow her and hopefully continue what she started.”