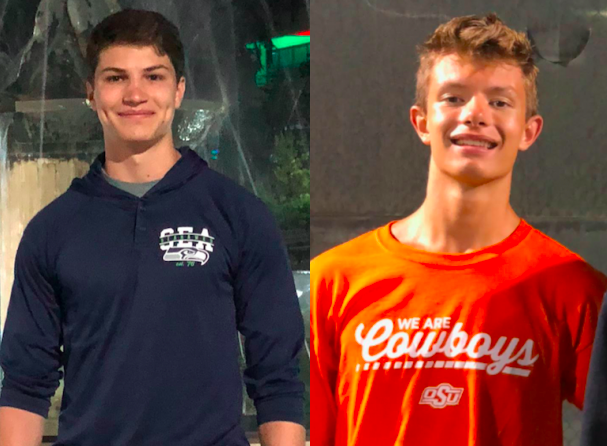 After Senior Venny Kojouharov and Dylan Nanney scored high on the PSAT last October, they were recognized as National Merit Semifinalists Sept. 11 and will qualify to become finalists, which College Board will reveal in February.

“I was very excited because it was something that I studied for a lot, so it was a goal I really looked forward to,” Venny said. “Right now, we’re semifinalists, but we just did the application to become finalists.”

Dylan said he was surprised about the news because he had mainly relied on his accumulated knowledge from classes.

“I thought, “I’ll do the PSAT and see how much I can improve from the PSAT to the SAT,” Dylan said. “I actually didn’t think this would happen.”

After receiving a College Board email, Academic Associate Principal Ashley Alloway and Principal Trent Dowd called both the students to the office to share the news.

“They said they needed to meet with us privately, and we (thought), ‘we may be in trouble,’” Venny said. “They locked me in a room, looked at me and said you’re in trouble. Then they gave me the paper that said I was a National Merit Semifinalist.”

Based off College Board’s Selection Index, 16,000 semifinalists were selected out of a pool of over 1.5 million students because their test scores were equal to or higher than the Index score.

“The cutoff for National Merit Semifinalists (for Texas) was 221, which is what I had,” Dylan said. “It was pretty exciting, but it was kind of expected. It has been unheard of (that) the score goes down or up.”

While semifinalists qualify for many scholarships, becoming a finalist opens even more scholarship opportunities if their application, which consists of documents such as essays, extracurricular activities, test scores and a principal’s recommendation, are accepted.

“There’s a lot of scholarships, one from companies especially if your parents work there (and) college scholarships,” Venny said. “For example, Texas A&M is one of the schools I’m going to apply to, and they give full tuition scholarship, so (being a semifinalist) can help you economically with college.”

Math teacher Deeanne Garrett, who had Dylan for pre-calculus, said she was not surprised about the news because Dylan has a natural understanding and is an intelligent, hard worker.

“He worked very hard to understand anything that doesn’t come easy to him,” she said. “He asked a lot of good questions and ma(de) sure he understood it before we moved on.”

Parents Robin and Shadrach Nanney said they knew Dylan had a high chance to become a semifinalist based on his score and ambition, so they were happy for him and shed tears.

“His friends and family have loved and supported him and, with that, Dylan is able to confidently reach his goals,” Shadrach Nanney said. “His friendship with Venny and many other highly academic students has allowed him to network and achieve greater accomplishments than he would have by himself.”

Venny studied for the PSAT and SAT at the same time by practicing with fully released exams 2-3 times a week on the English portion. He also practiced math tests in the PSAT class.

“I think a big part of why I got it was because I knew the importance of the test,” he said. “I feel like a lot of people think it’s just a preparatory thing for the SAT. So knowing what comes with it and the benefits of it with scholarships, that itself led me to really study.”

Venny said his parents and teachers, such as Corey Nieman who taught him Pre-AP and AP chemistry, showed him the importance of working hard.

“I wasn’t surprised because he’s very, very dedicated,” Nieman said. “ He’s the kind of kid that sets a goal and achieves it to make that a reality.”

Venny said students should not mainly rely or focus on expensive tutors or university books because the important part is dedication.

“You don’t need three years of practice,” he said. “If you can dedicate a month or two and tell yourself, ‘I’m going to practice every single day for an hour,’ you’re good, but it comes with self discipline.”