District Recognizes Mollie Blank as Athlete of the Month 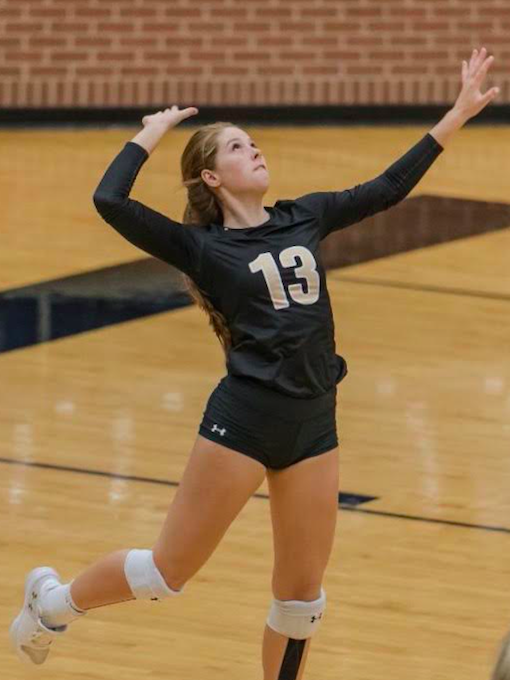 After recently winning against a major rival, Waxahachie HS, MHS varsity volleyball played against another opponent, Lake Ridge HS. Initially, the MHS team had a tough start after losing two sets but the team led strong with two winning sets. With the fifth set as the tiebreaker, the match ended with the MHS team closely behind with only a few points less.

After finishing the game on the court, senior Mollie Blank met up with her parents. Despite the recent loss, her dad smiled and revealed an email on his phone eagerly asking if she saw it yet. Confused about what he was referring to, she scanned the screen shocked at the words and quickly, her excited coach called her down to congratulate her.

On Oct. 1, the district recognized Mollie as one of its student athletes of the month for her excellence in academics, athletics and community service.

“I had no idea this was a thing,” she said. “I was just really honored and glad to be awarded.”

Starting this year, head coaches can send nominations to campus athletic directors. Then the district will select and commend two high school students and two middle school students each month.

“I nominated her because she’s so deserving: she works so hard, does such a good job (and is) a great leader,” English teacher, case manager and head volleyball coach Taylor Elrod said. “I was just excited that they noticed that over there and voted for her.”

Mollie is a setter and practices with the team six days a week and on Saturdays, completes a light workout and participates in team-bonding activities. She also plays matches with the team on Tuesdays and Fridays against opponents.

“She’s a force on the court, but also with her teammates off the court. She’s running around the court working with everyone, telling the hitters what they need to run and telling the defense where to pass,” assistant coach Brianna Kaiser said. “She’s earned her spot on our team as a captain and this award.”

Last year, Kaiser also had Mollie as a community service student, which Mollie assisted around the classroom by grading papers and completing other tasks for Kaiser.

“She’s always energetic and fun,” Kaiser said. “In the classroom, she makes good grades and is always working and trying to be her best.”

Mollie has played volleyball since she was 11 and said she has met some of her best friends since sixth grade.

“I was very proud of her and was not surprised,” senior and volleyball player Gracyn Margo said. “She is talented and will go very far in her volleyball career.”

While Mollie has been on varsity volleyball for three years and junior varsity for one year, she will play for UT Arlington’s Division I team in college.

“I’m super competitive, so I like to win,” she said. “ (Volleyball is) just something I have a lot of fun with and am really good at; so, I’m glad I found something I’m passionate about.”