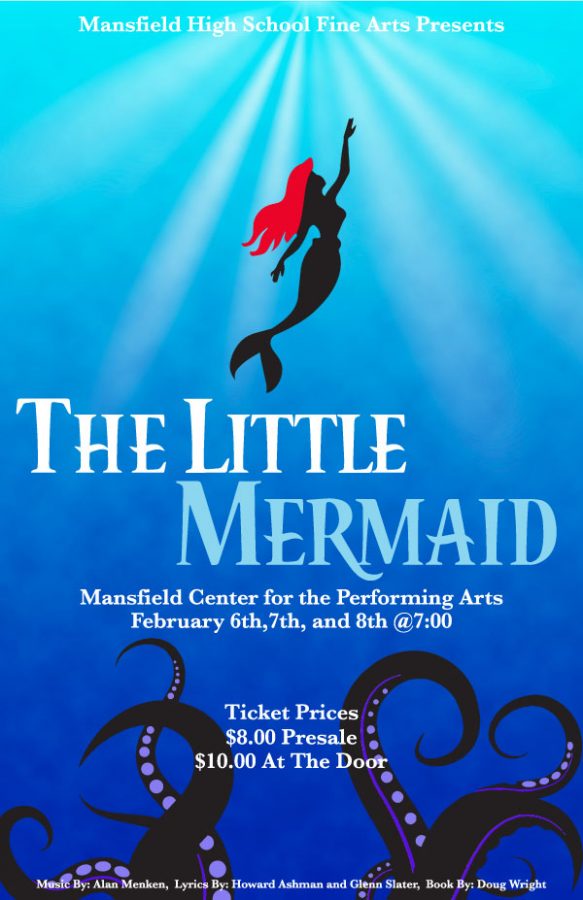 After auditions in October, theater students will present the spring production, “The Little Mermaid,” at 7 p.m. Feb. 6 to 8 at the MISD Performing Arts Center. They are selling $8 presale tickets (available in L3 and the book keeper’s office) and $10 tickets at the door.

“It’s a really great production,” theater arts teacher and director Altraniecia Starr said. “Usually Disney brings in a lot of the community, so (it was chosen) mainly to bring the community into the schools like a family.”

A few of the challenges of the musical include being set underwater, transitioning from land to sea and costumes, but the team said they have been able to work around it.

“For the non-human parts, it’s hard to get costumes right and there’s so many of them, so I took them home over the weekend, came in during lunch and put finishing touches on them,” head costume designer and senior Hannah Cherry said. “I wish we had more time, but everything turned out really good.”

The music will be a mixture of songs from the original movie and broadway musical.

“I always love working with students outside of the choir class,” Reginal Wright said. “The icing on top is working with my colleagues in band and theater toward a common goal. It has been a blessing to be a part of this amazing team.”

“Ariel is one of my favorite princesses and growing up, I used to love her because she had red hair and I had red hair too,” Rebekah said. “I thought it would be cool to have the opportunity to give people a little bit of magic on stage and that it would be fun.”

Rebekah said she is nervous to perform, but is also excited to interact with the children after the show and be there as a Disney princess.

“The Little Mermaid is a very difficult show because I’ve watched all the musicals online and it’s very difficult to make it look (realistic), but our directors have done such an amazing job bringing it to life,” she said. “It feels alive and magical.”