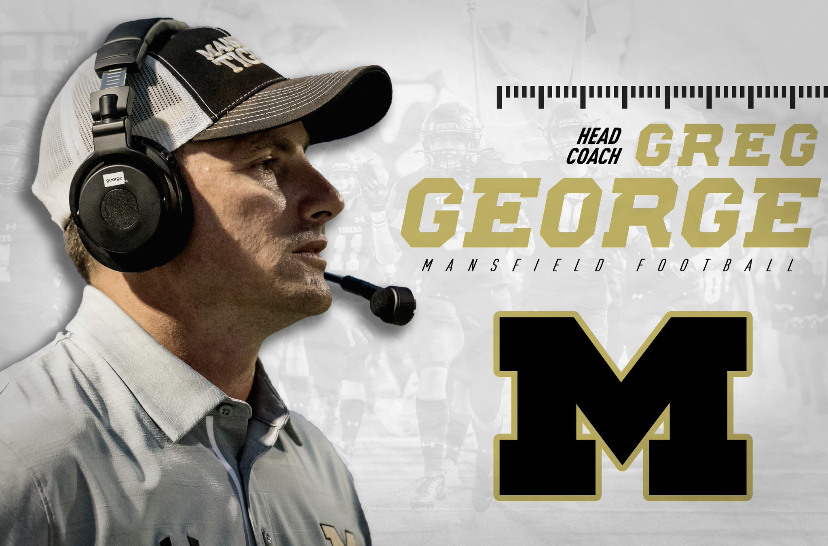 For three months, Coach Gregory George felt a multitude of emotions. He suffered alongside his best friend and former head football coach Daniel Maberry in his battle against cancer, until facing that immeasurable loss. He feared for his job and those of the rest of the football staff, while also working to have the courage to do what was necessary for the tigers, the school and community. The stress not only built up in preparing for interviews and decisions, but also in ensuring that the players would be okay through the unfortunate time. Then, he got the call.

After the heartbreaking loss of Coach Maberry, George was named the new head football coach and will work to build the program and the players even stronger.

“When I got that final call, all I can say is I felt total elation and absolutely some steadfastness to do right by Coach Maberry and continue his legacy,” he said. “To me, this title is one that I ultimately respect.  With any leadership position comes a great deal of responsibility, but I fully believe that this one has even more importance because I am running a program that is about influencing our young men, our community and our future.”

From a young age, football has been an integral part of George’s life.

“Some of my earliest memories are getting to buy a spirit ribbon from the cheerleaders on Friday mornings while in grade school, and playing our own game of football behind the stands while the real one was raging on the field on Friday nights,” he said. “In rural Texas, football was, and still is, king. I had exceptional coaches my whole way through school who helped shape me into who I am today. I had great teammates that I count as my close friends, and we were successful every year, making it to the state finals my senior season. We had been preparing for that final game since those grade-school days behind the stands.”

After leaving the farm life and bouncing around majors in college, George finally decided to do what was in his heart from day on: commit to coaching and teaching.

“I have been very fortunate that I have coached with some really great men who further molded me into the coach that I am today,” he said. “ Every school and program that I’ve been a part of was led by a coach of significance, and that is what I strive to be every day: a coach and teacher of significance in the lives of young men and women.”

For five years, George coached varsity football around the state – from the panhandle to the gulf – until he finally moved to Mansfield. Though he had multiple opportunities to be a football coordinator at other schools, he said he never felt it was the right move for him.

“I had multiple opportunities to move up and be a football coordinator at other schools, but never felt it was the right move for me,” he said. “I decided to actually take a step down by accepting a freshman football position at MHS in 2003, so that I could take a step up later. That first season was one of the most fun I’ve had with a small group of coaches. Coach Maberry, Coach (Mark) Stout and I all became fast friends and loved coaching together.”

While at Mansfield, George coached freshmen, JV and varsity, both offense and defense, at each level. He planned to start looking for a head football coaching position elsewhere the spring semester that Coach Maberry found out he had cancer.

“I knew that Coach Maberry would retire as the MHS head coach, so that meant if I wanted to be a head coach, I would have to go outside the district,” he said. “Of course, I could not leave my best friend in the midst of such news with such an important thing to deal with, so I gratefully stayed put in Mansfield to help him out; I wouldn’t have it any other way. He tried to talk me into going ahead with my plans, but I wouldn’t hear of it. My intentions were to start looking for a head coach job once he beat the cancer, because in my heart I just knew he would… we all did.”

However, those final months of Maberry’s life took a lot out of George in earning this new role.

“The first three months of 2020 seemed like both a blur and a fog, something not real but imagined,” he said. “Coach Maberry started to go downhill rapidly at the very end of January and passed away on February 4. It just didn’t seem real, but after the prior few weeks of January, I can’t say it wasn’t totally unexpected. I just never thought it would happen that fast at all. So, I had to go through a lot of really good experiences, and one that truly hurt to get this position.”

George has a detailed vision of what winning on the field will look like.

With this, junior and varsity player David Godsey said he looks forward to George coming in as the new head coach and seeing  where he will lead the team.

“He has been here a while and knows how we do things; instead of bringing in someone new, we have someone who knows the system,” he said. “I think he can lead the team to places we haven’t gone in the last couple of years. A lot of us were expecting this move, and we are excited about the changes being made and the direction we are headed.”

George also preaches that while winning on the field is certainly a goal, it is not the only goal.

“We are going to be a football program built on integrity, character and relationships,” he said. “The most important of our goals is winning in life. I want every young man that comes up through our program to be one that, when they leave our doors, will win at life by becoming great husbands, fathers and leaders among men.”