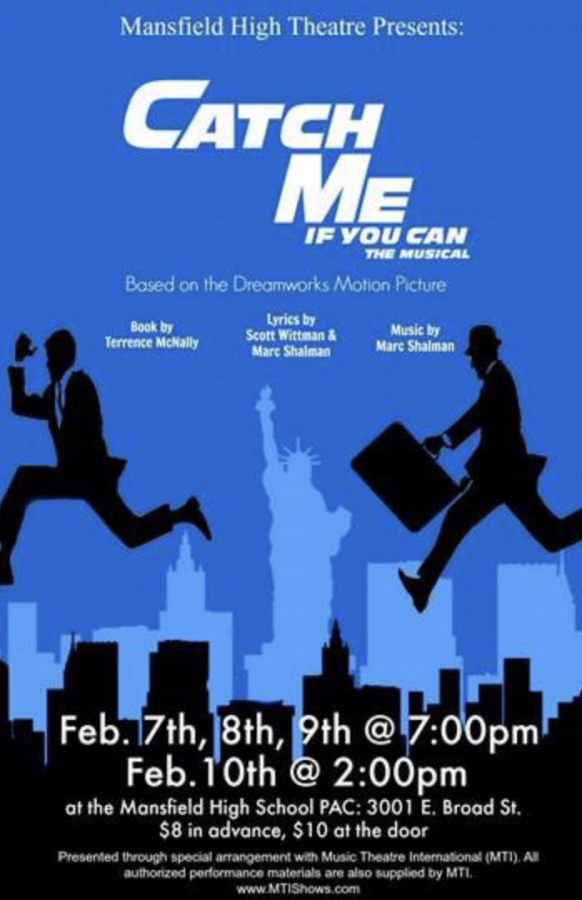 Tickets are available for the annual winter theater production, “Catch Me If You Can”, which is about a child who runs away from home and becomes a millionaire by working multiple careers through illegal papers. The show runs at 7 p.m. Feb. 7-9 and 2 p.m. Feb. 10 at the school’s performing arts center.

“I have wanted to do this production since 2015 and we’ve never found the right time or the right year to do it,” theater teacher and director Altraniecia Starr said. “The songs are really great and I think this is the year to try something different.”

This production was chosen for many reasons, but this year’s crew was a deciding factor.

“Whenever we look at shows, we look at what we have cast-wise like ‘do we have strong guys this year or strong females this year,’” theatre arts teacher Sherry Wright said. “This (year) was just a good balance for the kids that we had (and) we knew that they would be able to do this show.”

Each teacher put in their expertise in choir, teach theater, acting and costume design.

“We’ve had so much fun putting together the costumes,” Wright said. “We’ve sewn probably 30 or 40 costumes. I have a wonderful costume designer, makeup and hair designer and I love working with those girls.”

Preparations began in October because musical production requires a long process of teaching, and learning music, choreography, blocking and many other elements.

“It is really rewarding to see how the kids feel and how proud they are of themselves when they were thinking ‘I don’t know if I can do this,’” Starr said. “It’s a lot of hard work, but after you see how much the kids have grown, reached their goals and how happy they are, it is worth it.”

While there are many different roles in the musical including lights, management, dance or sound, currently the department is focused on assembling and merging all the pieces into one.

“We have rehearsal every day and we work on dances,” stage assistant manager and junior Hailey Hamilton said. “Sometimes we will go to the choir room and Mr. Wright will work with us on music. The tech and makeup-costume crew are really awesome and the set people are really close to being finished.”

Tickets are on sale for $8 until Feb. 8, however the tickets are $10 general admission after.

Once the previous fall show was over, the students had a week break until auditions and practice began for the winter production.

“Every day, the cast has rehearsal until 5:15 p.m. and we work either blocking with Ms. Starr or songs with Mr. Wright,” Cobb said. “The makeup and tech crew have rehearsals almost every day and work to make the set, create costumes or make designs. We work really hard to put on the best show possible.”